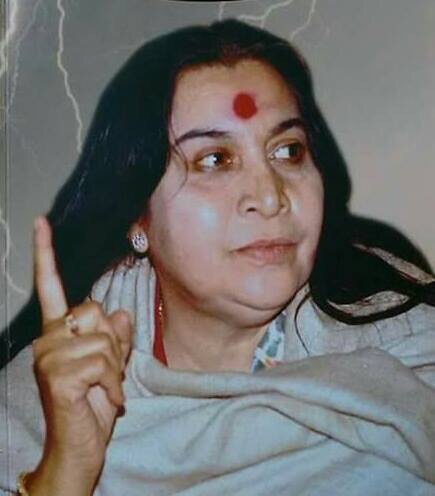 ………..:..In medical science also it is very ambiguous to say that it is the autonomous nervous system that runs your heart. So who runs your heart? Who is this ‘auto’? For this you have to rise above this human awareness. Once you get your self realisation you will be amazed that you go beyond science. […]

via “Once you get your self realisation you will be amazed that you go beyond science.”-Shri Mataji (01.07.1992) — The Divine Science

But God’s laws and God’s domain is very different from what we understand June 19, 2016

But God’s laws and God’s domain is very different from what we understand. We have never felt his love, we have been always working, all organized things because we were unsecure about something. Every institution is for some kind of an insecurity.

Because we are insecured, we think something is going to fall upon us, something horrible is going to happen, that is how we form a thing. Otherwise our children may be spoilt or our old people may die, or something may happen, we form an organization. This is not believing in God.”

Shri Krishna has said in His “Gita” – you must know that Shri Krishna was a diplomat, He was not a mother, and He knew human beings how they are. He wanted them to go round and round to find out the truth, because nobody likes a straightforward statement.

At that time specially He just told it to Arjuna. He said three things for them, in which see His diplomacy, if you can see through the lines, is first one He said that you must get to gyana. He was not a good salesman because salesman will never tell you the best thing first, but He said you should take to gyana. That is what it is. “Gyana” means this knowledge on your central nervous system.

But the second thing He said, that you should do bhakti, “Whatever fruit or flower or water you give Me, I’ll take it, but you must do bhakti which is ananya.” Now if you know Sanskrit, “ananya” – when you are not the other, when you are a realized soul.

If you are not connected, what is the bhakti on you? Many people complain, “Mother, I have been fasting, I have been doing this, I did this, and see my condition. I have become a nervous wreck.” It’s not the mistake of God; you are not yet connected. It’s a simple thing like a telephone.

If the telephone is not connected, what’s the use of telephoning? You’ll spoil the telephone. So bhakti without the connection is wrong, that’s why Krishna has said it, “Yoga kshema vam aham” – “First yoga, then kshema.” First you must achieve your yoga and then your benevolence will come; otherwise it won’t work out. Very subtly He has put yoga first. Why didn’t He say “kshema – yoga”?