Kundalini is like a rope with many threads March 3, 2015

When the kundalini rises without any hurdles, it reaches the Agnya and spreads on the lower brain plate like a cloud, so a heaviness or sleepy feeling crawls. I say that first the mother puts you to sleep. The second feeling is when the vital force of Kundalini melts down over the Ida and Pingala. As if the cloud of the vital force starts pouring bliss. Gradually the head feels as if the lead is being taken off. One feels relaxed. Now again these two channels carry it down up to nabhi and now a new force from Kundalini joins it. … Then the triple force rises which opens the agnya. At this time eyes get closed. The pupils start dilating.

Now the head gets clearer but some feel a mild pressure or throbbing at sahasrara. The agnya crossing creates the thoughtless awareness. You feel the silence of sahasrara. At sahasrara the Kundalini accumulates. A kind of release starts as the Brahmarandra (fontanel bone) opens. It works slowly with some, but with most of them it is with a gush. At that moment, the sadhaka (disciple) feels the cool breeze of the vibrations. This is “realization”. There are many who have got jagruti (awakening) and have got the curing power but they cannot remain in thoughtless awareness. They touch it for a minute or so. But the process of Kundalini oozing out works out with time and ultimately they reach a stage of doubtless awareness.

With some like X it was a quick permanent ascent, he felt as if two bath of ice fell on his hands and started melting. The cooling crawled into his Being. If the Visshuddhi is doubtful or stretched and constricted, then, one does not feel the vibrations despite realization, meaning the piercing of the Brahmarandra.. The collective consciousness is felt even before the Kundalini pierces the Brahmarandra fully. You start feeling the burning on the fingers and also the discriminating styles of collective consciousness are manifested.”

“The first centre is called the Mooladhara centre. It has four petals (sub-plexuses), is placed below the triangular bone, and is responsible on the physical level of the manifestation of the pelvic plexus which looks after all our excretion, inclusive of sex activity. When the Kundalini rises, then this centre becomes inactive in the excretion functions but active in the support of the rising of the Kundalini. Though the Kundalini has to rise through six centres, the first centre of Mooladhara protects the purity of chastity of the Kundalini at the time of its awakening.” – Shri Mataji 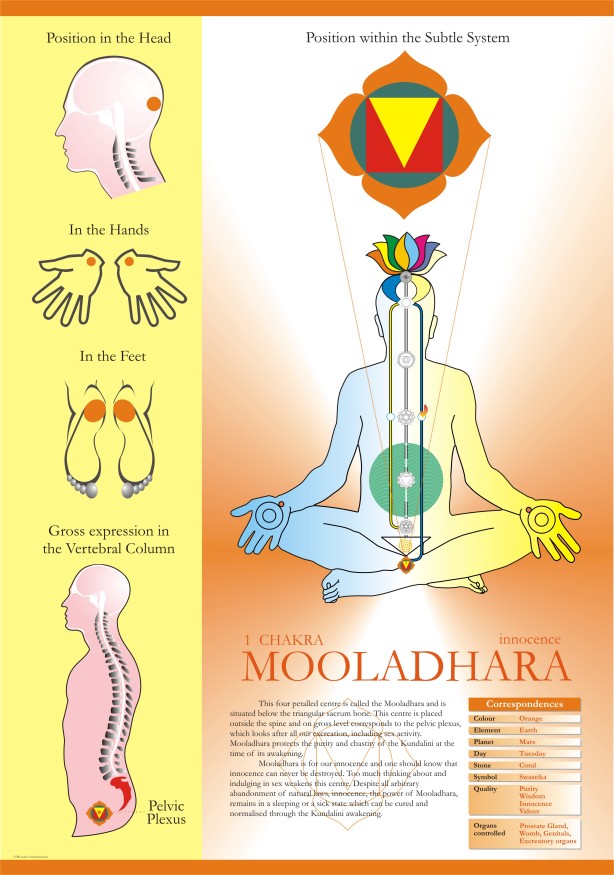 
View this document on Scribd